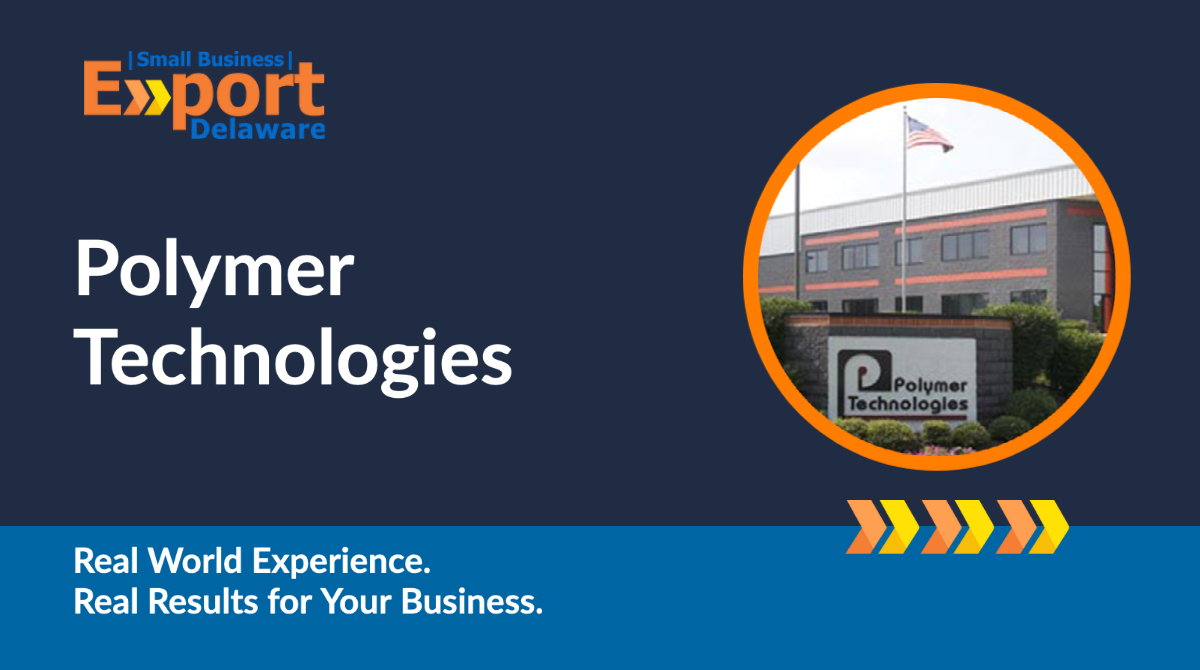 In 2015 Jeremy Dayton took his first business trip to Mexico with the State of Delaware. He visited several companies in Mexico City. Since that trip, he’s returned to Mexico four times, and Polymer Technologies has developed several sizable customers there. Read how the company has expanded its business over the last six years and its secret to developing long-term client relationships.

Polymer Technologies is a Delaware manufacturer of products engineered to manage acoustic and thermal energies, structural vibration, and air and fluid transmission. When they found out about an opportunity to participate in a business trip to Mexico led by the Delaware Department of State in 2015, they decided to apply. These State-led business trips (aka “Trade Missions”) are great opportunities for small businesses like Polymer to enter new export markets. The State of Delaware’s team handled all the trip logistics and developed a vetted target list of prospective customers.

“The trade missions were instrumental,” says Dayton, where “Meeting face-to-face was key in developing initial relationships and bonds.”

When Dayton set foot in Mexico for the first time, he had a full schedule of client meetings booked for him. All he had to do was show up! Interpreters came along to every meeting. “In some cases, I wouldn’t have been able to do it without the interpreters,” says Dayton.

The first initial trip consisted of exploratory meetings. Dayton asked questions to find out what issues the prospect was experiencing with their current equipment. He listened and looked for ways his products would offer a solution.

After the whirlwind first trip, he returned to the States to evaluate the meetings and follow up with each individual he met. He kept in touch with the prospects he met and corresponded via phone and email to develop proposed applications.

Over the next year, it became apparent that one of the business prospects was having anti-vibration issues — this is precisely the type of problem that Polymer’s components can handle. He sent down several samples and booked a follow-up visit to meet with the engineering team. At that time, the client indicated they would be moving forward with Polymer. Within the year, they achieved their first purchase order!

That same year, the client had challenges with another supplier installation for noise insulation materials. As Dayton visited, he addressed the challenges they were facing and had another opportunity to provide a quote.

“Our pricing was competitive, and we had already proved ourselves,” says Dayton. So the client signed another deal! What was once a prospect in 2015 is now a significant business account doing $260,000 of business annually. Next year, Dayton anticipates $350,000 from this client alone.

But that’s not their only client in Mexico. Polymer has done a lot of business with Boeing over the years, becoming qualified in 2006. As he traveled to Mexico to visit another client, he would stop in and develop relationships with a Boeing Tier 1 in Mexico. After a year and a half of doing so, they finally got their first orders. The account has grown to be another top client for Polymer, generating nearly one million dollars of purchase orders annually.

In six years, Dayton’s multiple trips to Mexico have paid off, and he now has two top clients in the nation. “The fact of the matter is, without multiple trips, we wouldn’t have been able to lock down business.”

The nature of Polymer’s business is sustained through ongoing, repeat clients. Typically they work with companies who need their products year-round. Dayton and his team service their client accounts to cultivate long-term relationships.

The nature of Mexican business culture and society is much more relationship-oriented. Dayton says it’s “like how the US did business in the 1980-90s.” Generally, it takes longer to close a deal outside of the US. Dayton agrees, “A deal that takes six months to one year in the US will take two years to develop in Mexico.”

That’s why Polymer invested so much time and energy traveling to Mexico. Luckily, the SBA STEP Grant helped to offset some of the costs. Plus, the Export Delaware team supported Dayton along the way to make the most of every touchpoint with prospects.

The State’s trade representative, Miguel de Regil, put in a lot of leg work for Polymer in Mexico. He helped Dayton follow up after each trip. “Without that, we wouldn’t have gotten off ground zero,” says Dayton. Over the past few years, Miguel has served as a liaison for Polymer and other Delaware small businesses in Latin America.

Miguel is not intimidated or out of his element with engineers and can navigate business development calls superbly. “Having someone in the country, familiar with the market, who could speak intelligently about manufacturing is a real benefit.”