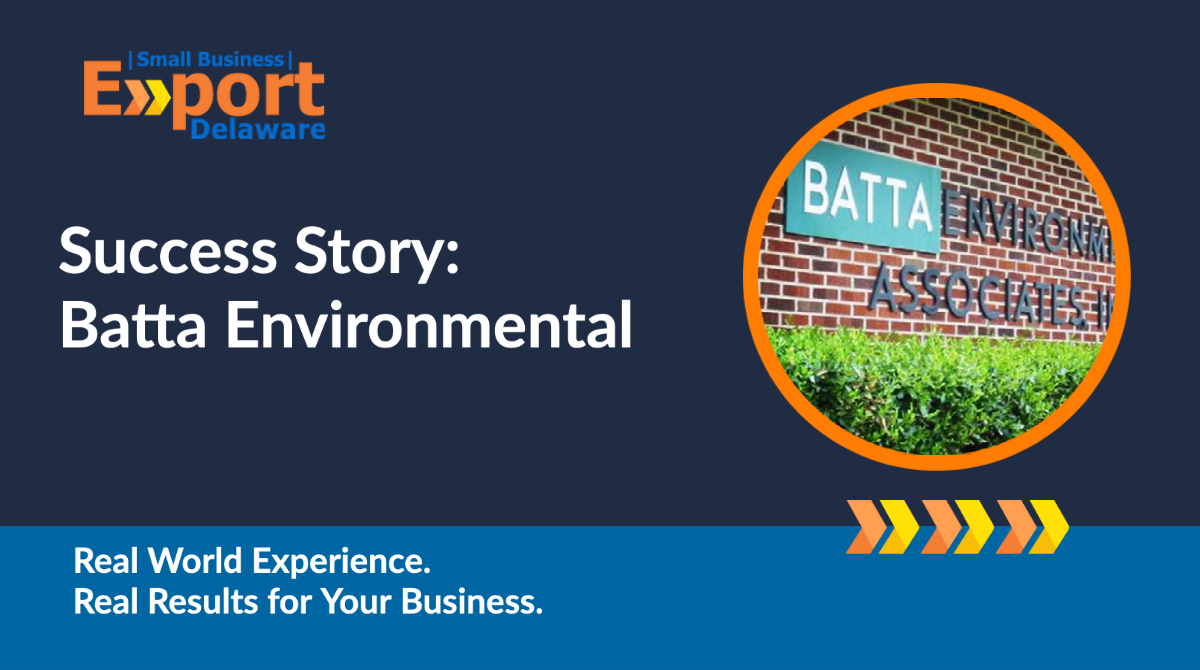 NEWARK, DE — Delaware small business, Batta Environmental, received a sizable USTDA grant-funded contract award to provide environmental engineering services for CONAGUA, the National Water Commission of Mexico. The initial phase of the project totals $540,000. The second stage of the project is estimated at $10 million, with the opportunity for more in the future.

This is a tremendous success for the company, which has focused export efforts in Mexico with the help of Export Delaware.

In 2018, Batta Environmental participated in a State-led business trip to Mexico. This trip was funded in part by an SBA State Trade Expansion Program (STEP) Grant, awarded by Export Delaware. At the time, Batta Environmental was looking for a local engineering partner who could help them expand into the country.

Miguel de Regil, the state’s international trade representative in Mexico, provided several introductions for Batta. As a result of this trip, they identified a Mexican partner, and have kept in touch since then.

Early 2019, Batta learned about the USTDA Request for Proposal (RFP) opportunity in Mexico from the US Commercial Service and decided to apply. Both Miguel de Regil and Batta’s partner in Mexico helped facilitate the proposal submission process. In addition, Beth Pomper, the Director of Export Delaware, wrote a letter of recommendation for the firm. Later that year, they were notified that they were one of two finalists being considered for the project.

Next, the project went into a holding pattern and the company didn’t hear anything about the grant. At this stage many small businesses would have given up, thinking that the opportunity was lost, but not them.

Export Delaware planned another business trip to Mexico in January 2020. Batta was encouraged to participate and collaborated with Beth and Miguel to determine how they could move the needle forward on this USTDA grant-funded contract they applied for, as well as other potential export opportunities in Mexico.

Miguel put forth a herculean effort, and was able to deliver a meeting for Batta with the key decision-maker at CONAGUA. Miguel and Batta’s engineering partner in Mexico provided support during the meeting as well. Although he was tight-lipped about the project, the CONAGUA executive was very welcoming and spend a great deal of time with them. Batta left with a good feeling.

“This meeting contributed to getting the deal. Going down there, seeing them, and shaking hands, really helped a lot,” says Batta.

Miguel and the local partner in Mexico continued follow-up outreach. Finally, in June 2020, they received the award notice.

“This is a sizable deal for Batta, especially in their industry,” says Beth Pomper, the Export Director of Export Delaware, “We are thrilled that we could help them along the way. Batta Environmental is very global minded and understand the value exports bring to their business.”

Neeraj Batta credits Delaware’s support and the STEP program as one of the key reasons why they won the award. Export Delaware’s STEP program funded 50% of his travel costs to Mexico (both trips). The step grant program also supports Miguel, the international trade rep in Mexico. Miguel’s support and securing their engineering partner in the country, and setting up meetings on behalf of the company, was critical to their success.

“This was a STEP-led effort along with support from other partners,” says Batta, who has participated in the program for several years. “How much Export Delaware, the Department of State, and their partners are willing to put something together to make your company shine and stand out from the crowd is very important.”